The CPMR Baltic Sea Commission (BSC) held its 23rd General Assembly in the City of Oulu (Finland), on 16 May 2018. The event brought together more than 50 participants including political representatives from 17 Regions (from Estonia, Finland, Germany, Poland and Sweden), as well as external guests, to discuss European policies and Baltic Sea Cooperation.

The meeting concluded with the election of the BSC’s new President, Mr Jari Nahkanen, Member of the Board of the Council of Oulu Region. 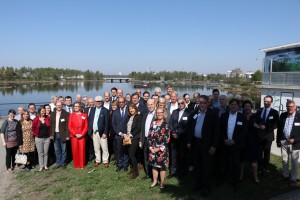 The event provided the opportunity for Member Regions to discuss the European Commission’s proposal for the future of the EU budget, published on 2 May, and the issues at stake for BSC Member Regions.

CPMR Secretary General, Eleni Marianou, presented the CPMR’s analysis on the EU budget proposal and some elements of the future Cohesion Policy that could have a major impact on the development of the policy.

Member Regions were alarmed by the 7% cut proposed to the Cohesion Policy envelope and agreed that the policy must not be sacrificed as it brings added value to the development of all regions in Europe.

Discussing the added value of European Territorial Cooperation (ETC) programmes, Member Regions emphasised the importance of preserving maritime cross-border cooperation programmes for the post-2020 period. This message has been raised in a CPMR Open Letter on ETC sent to the European Commission a month ago.

During the General Assembly, BSC Members adopted the “Oulu Declaration”, conveying key political messages to EU decision-makers on the EU budget, the future of Cohesion Policy, and the EU Strategy for the Baltic Sea Region.

The Chairs of the Baltic Sea Commission Working Groups on Transport, Maritime Affairs, and Renewable Energies and Climate presented their activities carried out throughout the year.

Participants also discussed the role of regions in the implementation of the sustainable development goals and reflected on how to create a better innovative ecosystem in the Baltic Sea Region, identified as priorities for the CPMR Baltic Sea Commission in the 2017-2019 work plan.

More information on the activities of the Baltic Sea Commission can be found in its 2017-2018 Activity Report.

Election of new President and Vice-Presidents 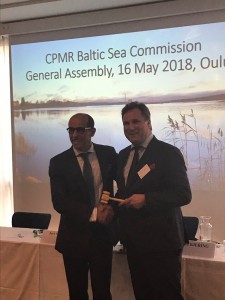 the four-year Presidency of Mr Jari Sainio of the Regional Council of Helsinki-Uusimaa, the Baltic Sea Commission elected Mr Jari Nahkanen, Member of the Board of the Council of Oulu Region as its new President.

The new President said: “I am proud to be your elected President. The CPMR, and its Baltic Sea Commission, is a strong European cooperation organisation voicing the needs of the regions. Even if the regions around the Baltic Sea are different in nature, it is important that we cooperate in a way that is as unified as possible, so that our influence on the CPMR and in other arenas increases and our voice will be heard”.

Pictures of the event are accessible here.