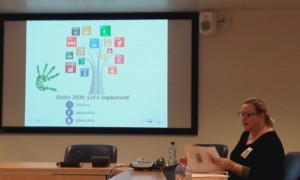 Under the Presidency of Pauliina Haijanen (FIN/EPP), the “Baltic Sea” Interregional Group in the Committee of the Regions met on 1 December 2017 to discuss the Baltic 2030 Action Plan.

Krista provided the group with an update on the work of the CBSS Expert Group on Sustainable Development, in which the CPMR’s Baltic Sea Commission is involved. The Baltic Sea Commission has identified the “role of Regions in implementing the SDGs” as one of its priority areas for 2017-2019.

Krista also informed participants about the Baltic Leadership Programme (BLP) on the 2030 Agenda which aims to increase the capacity of stakeholders in the Baltic Sea Region to implement the SDGs. The Baltic Sea Commission attended the first BLP modules, which took place on 12 October 2017. More information can be found here.

The CPMR Baltic Sea Commission is hosting the Secretariat of the Interregional Group “Baltic Sea”. The next meeting will take place in early February. More information to follow.