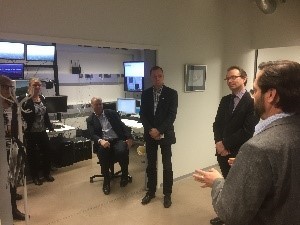 During summer 2017, the European Commission (DG MARE) released the report “Towards an implementation strategy for the Sustainable Blue Growth Agenda for the Baltic Sea Region”.

The CPMR BSC Maritime Working Group participated in the stakeholder dialogue leading up to the drafting of this report. During the meeting, the Maritime Working Group underlined that whilst the report was a good document, it is however crucial to initiate new partnerships in order to enhance blue growth cooperation in the Baltic Sea.

During the meeting, Helinä Yli-Knuutila, from the Smart Blue Regions Project, gave an update on the project and Åsa Bjering invited both on-going Interreg projects and individual member regions to join in the current discussions on creating a Platform for Smart Specialisation in the Baltic Sea Region.

It was also highlighted during the meeting that regions and stakeholders should make sure they contribute to the on-going DG MARE process to develop a pipeline of bankable projects to present to potential public and private authorities.

Heikki Saarento, Director of Planning at the Regional Council of Southwest Finland, presented Finnish Maritime Spatial Planning (MRS) in which Regional Councils have a special coordination mandate. It was also discussed how the transnational coordination of MSP is looking and how stakeholders from Regional Authorities could be more involved.

Sustainable Tourism is a fairly new item in the Work Plan of the Maritime Working Group. At the invitation of the Working Group, Samu Numminen, Project Manager in Interreg Central Baltic, gave a presentation on on-going tourism projects in the Central Baltic. Furthermore, Åsa Bjering gave a short update about the Sustainable Tourism Project that Polica Area Tourism of the EUSBSR is leading and in which the CPMR Baltic Sea Commission is an Associated Partner.

The meeting finished with an interesting study visit of the Maritime Academy of Novia University of Applied Sciences where the participants were allowed to test the simulators used in their education programmes.

The next Maritime Working Group meeting will be held on 7 March 2018 in Stockholm. It will take place in the framework of a meeting on the implementation of Sustainable Development Goals which is jointly organised by the CPMR Baltic Sea Commission and Euroregion Baltic.

The members of the Maritime Working Group are also encouraged to attend the Conference Baltic Sea Future which will take place on 8 – 9 in Stockholm.