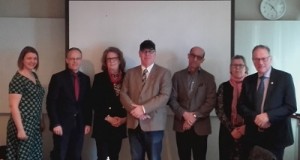 Hosted by the Region Västerbotten, the Executive Committee of the Baltic Sea Commission met in Umeå, Sweden, on 19-20 March to discuss a range of upcoming activities.

Chaired by the President of the Baltic Sea Commission, Mr Jari Sainio, the meeting provided the opportunity to discuss the preparation of the upcoming BSC General Assembly which will be held on 16 May in Oulu, Finland.

Executive Committee members also discussed the ongoing work of the BSC Working Groups on Transport, Maritime Affairs and Renewable Energies. In addition, there were updates on several projects with which the Baltic Sea Commission is associated.

During the meeting, the Executive Committee received an update on the upcoming 9th Annual Forum of the EU Strategy for the Baltic Sea Region, which will be held on 4-5 June in Tallinn. At the event, the Baltic Sea Commission will be organising a seminar on how to strengthen Innovation Ecosystem in the Baltic Sea Region. More information on this seminar will be available soon.

Finally, the Executive Committee meeting offered the chance to reflect on the discussions held during the CPMR Political Bureau organised in Patras, western Greece, in early March.

In view of the Commission’s proposals on the EU Budget and EU policies for post-2020 expected to be published in May, the event was an excellent opportunity for CPMR Regions to recall key messages on Cohesion Policy, Transport and Maritime Affairs.

The highlight of the event was the adoption of the “CPMR vision for a post-2020 EU Budget”.