The Union of Baltic Cities (UBC) held its General Assembly and celebrated its 25th anniversary on 24-27 October in Växjö in Sweden. 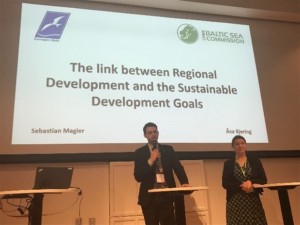 The topic of the 2017 UBC General Assembly was “Leadership for the future – Cities as Leaders for Global Sustainable Development”. Discussions focused on how cities are pioneering in various fields of life, such as promoting digital start-up ecosystems, preventing youth marginalisation and fighting climate change.

Several organisations, including the CPMR Baltic Sea Commission, Euroregion Baltic and the Council of Baltic Sea States were invited to participate in a workshop dedicated to the implementation of Baltic 2030 and the role of cities and regions.

The Executive Secretariat of the CPMR Baltic Sea Commission presented the work plan priority of the role of regions in implementing the SDGs and how this links with Cohesion Policy and regional development.

During the Conference, the UBC adopted a Resolution on the United Nations Agenda 2030 for sustainable development goals. The resolution can be downloaded here.