How to communicate the added-value of transnational cooperation in the Baltic Sea Region? 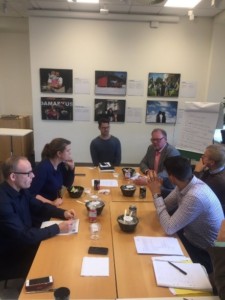 The CPMR Baltic Sea Commission organised a seminar to reflect on how to increase the capacity of Regional Stakeholders in communicating the added value of transnational cooperation in the framework of the EU Strategy of the Baltic Sea Region (EUSBSR) on 5 October 2017 in Stockholm.

The communication handbook was developed in view of the 8th EUSBSR Annual Forum in June 2017 to support the regions’ every day work of engaging local and regional stakeholders in the EUSBSR. A session was organised during the event to discuss the first results of a survey, which the handbook is based on. You can find a summary of that session here.

During Spring 2017, the CPMR Baltic Sea Commission carried out a survey on approximately 50 transnational projects and initiatives engaged in transnational cooperation in the Baltic Sea Region. The objectives were to identify the added values and driving forces of these projects and initiatives and to explore how they could be communicated in a successful way. The handbook contains templates, examples and suggestions on how to bring these discussions of added value and ownership to relevant stakeholders.

The report has been partly financed through Interreg Baltic Sea Region Programme.

The final version of the communication handbook will be uploaded on the CPMR BSC website during November.