A strong Baltic voice for the TEN-T revision 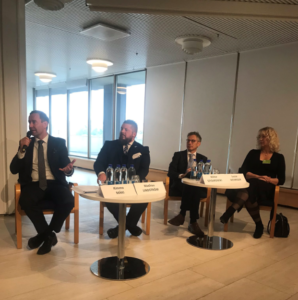 On 9 and 10 October, the CPMR Baltic Sea Commission (BSC) Transport Working Group and Helsinki–Uusimaa Regional Council met with Ms Catherine TRAUTMANN, Coordinator of the North Sea-Baltic Corridor of the TEN-T Network and Jean Louis COLSON, Head of Unit in the European Commission’s Directorate-General for Transport and Mobility to discuss the revision of the Trans-European Network for Transport (TEN-T) and voice the views of the Baltic Sea Regions.

On 9 October, a round table brought together some 45 transport experts from BSC Member Regions. Discussion focussed on how to improve the governance schemes in the corridors and for the whole TEN-T network and how to better engage all relevant stakeholders in the implementation process.

Participants highlighted some key messages to enhance the implementation of the TEN-T network, such as:

Ms Trautmann stressed the importance of exchanging views with regional actors in this kind of setting. She invited the BSC and the CPMR to continue working on TEN-T in close collaboration with the 10 Coordinators and DG MOVE.

On 10 October, a high-level seminar brought together some 80 participants. Discussions involved Mr Jean Louis COLSON from DG MOVE, Mr Kimmo MÄKI, CEO of Finavia, Mr Erik MUST from the European Court of Auditors, Mr Mikael NYBERG, high-level representative, Ministry of Transport and Communications in Finland and Mr Jukka Honkanen from the Defense Command of Finland.

Panellists covered a broad range of transport-related issued to be tackled in the coming years such as military mobility, access to investments for transport infrastructures and innovation, going beyond series of projects in the implementation of TEN-T, how to integrate the first mile area into the corridors, how to assess a cost-benefit analysis for TEN-T projects, etc.

Mr Colson, called on the BSC and the CPMR to continue their work on TEN-T and invited them to reflect on how to combine the necessary efforts for climate neutral transport and territorial accessibility.

This 2-day seminar was developed as a part of CPMR work on TEN-T that was launched during the CPMR Inter-Commission Transport Working Group meeting in April 2019 when each Geographical Commission presented their key messages to DG MOVE. It reinforces the answer of the CPMR to the European Commission’s public consultation on TEN-T.

Ms Kaarin TAIPALE, Vice-Chair of the BSC Transport Working Group and Member of the Regional Council of Helsinki-Uusimaa reported back from the meeting at the CPMR General Assembly in Palermo in order to contribute to the Policy Position on climate neutral transport that was approved during this event.